I'm a bit late getting to it, but I spent yesterday finishing off the Season Handicap tables for 2018/19 and have begun to get everything set to go for the 2019/20 edition.

First, I have to tie up the loose ends from the 2018/19 and point out which teams won in their respective leagues. I'll start with League 2.

League 2
The winning team in the handicap table for League 2 was Forest Green. The team had a twenty-one point head start against the other teams in its division. In its real league, Forest Green came fifth with seventy-four points.

The actual League 2 winners - Lincoln City - had four points before the season, but finished off in fifth with 89 accumulative points.

My system had the them to win the season handicap table with ninety-four. 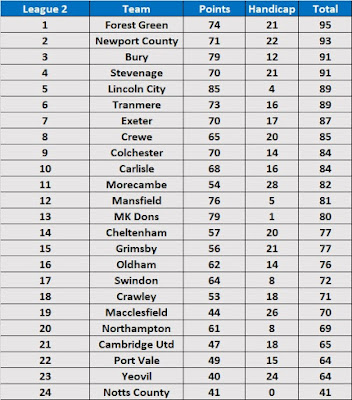 League 1
Bradford topped my projections for League 1 with 111 points with ninety-points from the average position points and then the seventeen from the bookies.

Disastrously, Bradford came twenty-third in the season handicap table. In reality, the team did one worse as it finished in the bottom of the division and will play next season in League 2.

Luton Town won both the League and season handicap tables. Its eleven point start added to the season haul of ninety-four means it had 105 when all was tallied up. 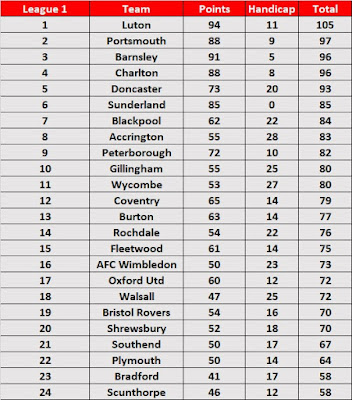 Championship
Norwich won both the Championship and the season handicap table. The team accrued ninety-four points during the season and - adding in the fourteen from the bookies before the campaign - they ended up with 108.

My system had West Brom to win the handicap table, but - as you can see - they came in seventh place when all was said and done. 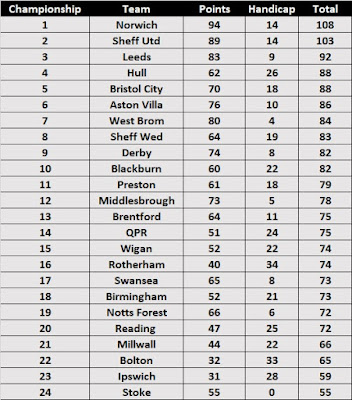 Premier League
My method to pick the Premier League season handicap winner had Manchester City at the top. This was despite City getting a 0 before the first kick off of 2018/19.

Liverpool came close to winning the league with its 97 points to City's 98. However, in the season handicap table, the Reds' six-point head-start was enough to top the table with 103 points. This was five points more than City, who came in second. 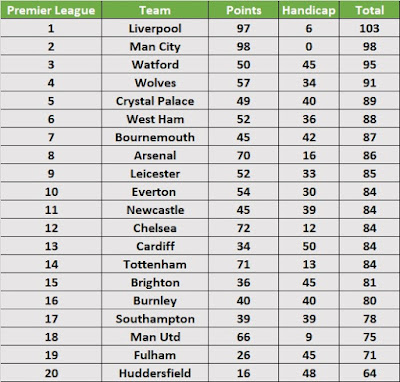