If not top, it would be very near it. 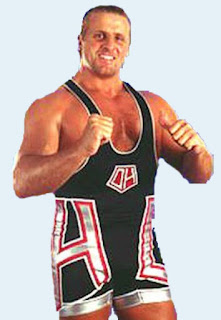 It was twenty years tonight for me. It would have been the early hours of May 24th as I watched the WWE Over The Edge pay-per-view live at home in my living room.

I'll never forget  that night. The fact I am writing about it nearly twenty years to the moment should be a testament to it.

I remember all the commotion that was going on as Jim Ross had to cut to a pre-taped video of Owen - dressed as the Blue Blazer - while paramedics and others tried to revive Hart after he fell from the ceiling of the Kemper Arena in Kansas City, Missouri.

The fall was not caught on the broadcast. Nor was the attempt to save the dying, possibly dead, wrestler.

The WWE camera focused either squarely on commentator, Jim Ross, or at the audience as he relayed the seriousness of the situation. Ross would make it clear on many occasions that this was not part of the show.

I recall walking upstairs into my parents' bedroom. My father was working the night shift, so it was only my mother in there. I told her what was going on.

My manager at work - who was at his home watching the show - also texted me as this was going on.

The show resumed. I didn't even think for a moment that it was in bad taste to continue a show after an accident such as that.

Later on in the broadcast, Jim Ross broke the news that Owen had passed away from the fall.

Once again, I ascended the stairs, woke my mum up again. This time I told her that Owen had died. Her following question hit me.

It was 'Have they cancelled the rest of the event?'

Or something along those lines.

It hadn't. The show went on.

Owen's death taking place before my eyes - or very close to it at least - is the worst experience I have ever experienced as a professional wrestling fan.

As a wrestling fan, who was initially naive enough to not consider the continuation of the event distasteful, I selfishly wonder what could have been had Hart lived. All those potential matches with the likes of Eddie Guerrero, Chris Jericho and more who would have began to show up in the WWF/E from 1999 upwards.

More than that - I feel sorry that his wife, and two young children, had to go through that.
Posted by David Taylor at 10:00 AM