Here's something that was really weird - yet great - that happened to me yesterday.

I've been suffering from a cold/flu since late last week and was feeling a bit drained yesterday afternoon, so decided to lay down and watch TV. While laying there watching Sunday night's episode of Twin Peaks (that's another story for another time!), I looked over at a box of the NES Classic Edition that I bought last year. I thought to myself that 'they announced its launch around this time last year, so I wonder if Nintendo will reveal a Super NES Classic soon.'

I must have dozed off for half an hour or so after Twin Peaks ended. After waking back up and checking my emails, I checked out Twitter. One of the guys I follow had tweeted all about..

Yes, you guessed it. A SUPER NES CLASSIC! 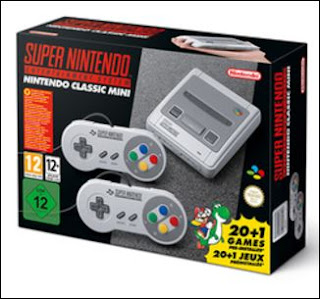 Nintendo must have announced it shortly after I was thinking about one.

The Super Nintendo is my favourite console of all time, so I will - without a doubt - try and get hold of one of these devices that will have twenty-one games.

Of the 21 titles, I already own just a few. One game that is also interesting to see in the list is Star Fox 2. This is because the game was never released, so the first time anyone will be able to own a copy is by having a Super NES Classic.

Here's the full list of titles. I have highlighted the games that I own already:

Even though I only had four of these games, there are a few that friends of mine owned back when we were Super NES owners. Even if I counted them, there are still more than a handful of games that I didn't have access to, so I think this could be a cool thing to have.

It's due to be released on September 29th.
Posted by David Taylor at 7:00 AM