The Goonies celebrated its thirtieth anniversary yesterday. Had I known, I would have dedicated a post then rather than today.

If you live on the same continent as myself with a similar memory for stupid details, you're probably second guessing the fact the movie came out on June 7th 1985.

To me, it will always be a November/December movie because that's when it made its way to these shores. But this is not the case - it really was released in June of 1985 in the US.

Thinking back, the cinemas were really peculiar back then. The USA had movies out months before they made it to the UK. I recall seeing video cassettes of films in the rental store on the U.S. Air Force base my uncle was stationed at in Germany and then getting home months later and seeing the same film being advertised as 'Coming Soon' at the Cinema.

Seriously.  For example, I vividly recall Who Framed Roger Rabbit? being out in the summer of '88 on the base and then making its way to our country for Christmas.

Same with Masters of the Universe in 1987.

Anyway, I am off on one here. Let's get back to The Goonies. A film that I have watched so many times over the past thirty years.

When I was reading about the anniversary, I came across a quiz where readers could answer twelve questions based on the film.

There was one question I stumbled on. Funnily enough, it was about American football. It asked: 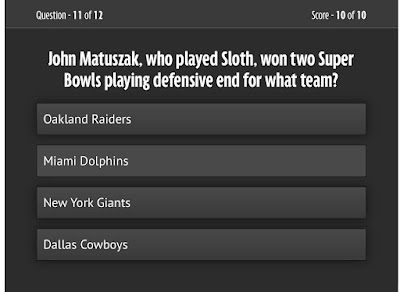 For a start, I had no idea that the man who played Sloth in the film was a former American footballer. That was a cool bit of trivia.

I looked down the list and it was a risky pick. I had absolutely no idea where he could have played.

I went with Oakland. My reasoning was that it was the closest city to Hollywood. Plus, I also think Sloth would fit right in with members of Raider Nation.

Seriously, he would have! 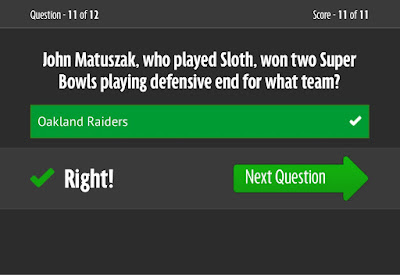 I ended up getting the final question right to make it a perfect run. 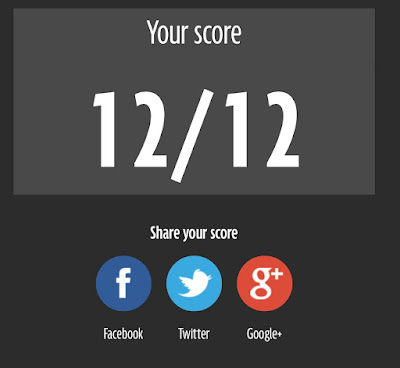 Along with all the articles written about the film have come the stories about sequels.

I have heard a few over the years. Some have reported that there was going to be an animated movie with the same characters (Mama Fratelli and Sloth are both dead in real life plus The Goonies are all in their forties or older now) so this would have made sense.

There's also suggestions that they could make a sequel with the characters from the original movie's children be the new Goonies.

I've even read there was a Goonies Musical play being written for Broadway.

My suggestion is simple. Don't do anything. Leave the memories alone. Especially when it comes to this film. It is as good today as it was back then. Let it live on as a standalone that has stayed a part of pop culture for all these years.
Posted by David Taylor at 9:00 AM