Nelson Frazier died on Tuesday following a heart attack. I was surprised to hear he was only forty-three. 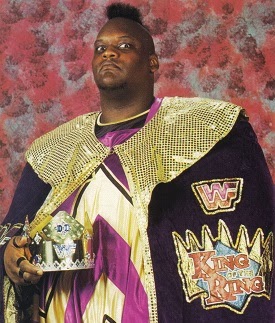 It's hard to judge which moniker he would be best remembered under for various reasons. During the peak years of the WWF, he was named as Viscera.

His biggest run came during 1995 when - as Mabel - he won that year's King of the Ring tournament to become 'King Mabel' which led into a match for the WWF World Championship against Diesel at SummerSlam '95.

Even though the 1995 push was a highlight of his career, it came at a time when the business wasn't faring well.

He debuted for the company in 1993 as part of a babyface tag team named Men on a Mission (M.O.M). He was paired with Bobby Horne, who wrestled as 'Mo' and were managed by Oscar, who would rap as the trio walked to the ring.

He last worked for the company a number of years ago and was then known as Big Daddy V.
Posted by David Taylor at 12:00 AM