A few weeks ago, I was on the hunt for a new mouse to go with my laptop. One stood out because I liked its colour. 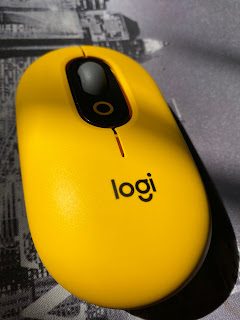 The Pop mouse is part of Logitech's studio series. I'm not really a mouse kind of person. I am usually happy going for a cheap wireless one that uses an adapter in a USB slot on my computer. However, I thought I would go down the Bluetooth route once again (I had an arched mouse with my Microsoft Surface over five years ago).

I do not regret shelling out the extra bit of cash. It works a treat. There is no noise when it is clicked and the scroll button is great.

One of the things I was not really interested in when I read up about the mouse before I purchased it is the emoji button. The user can click the button and it works as a hotkey for emojis. You'll need to download the software to make all the adjustments.

If I were to click on the mouse right now, I will have a menu of emojis, GIFs, Kaomojis and symbols literally at my fingertip.

I don't plan to use the software to choose one particular emoji to use. I'm happy with the menu so I can pick and choose at that particular moment. Like now. Let's see what I can do:

There tons to choose from.

Earlier this week, I was admiring the look of the mouse and texted my friend to tell me about it. I explained Logitech's Pop range and noted to him that there was a keyboard that would go with the mouse.

I told him I had no intention of buying the keyboard even though - as I pointed out when I was talking myself out of buying one - it would look cool to be together with the mouse.

Twenty-four hours removed from talking about the keyboard, I decided to purchase one. It arrived on Friday afternoon.

Just like with the mouse, it is Bluetooth compatible and you can use it on up to three different devices. The emoji gimmick exists on the keyboard as well with the ability to use the most often used expressions on the right hand keys.
There are even additional emoji keys inside the box just in case the user wants to have differing emojis at hand.
Unlike the mouse, which is 100% Bluetooth, the keyboard also has a USB adapter for anyone who may want to use the keyboard in the regular wireless way.
I have only used the keyboard for a little over twenty-four hours. I love the way the keys feel as I type with it.
It feels old school like I am using a typewriter or something. It will take a bit of getting used to, though. I noticed that I made a fair amount of typos. That isn't abnormal. I often make typos when I type fast (especially when using a new keyboard). 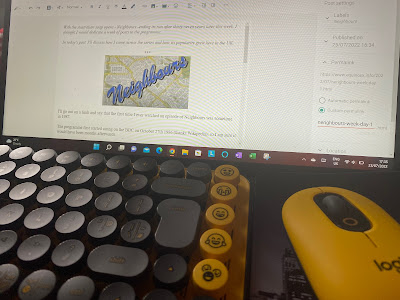 As you can see in the picture above, I have both keyboard and mouse working together by flipping my laptop over.
Just like with the mouse, the keyboard can also be attached to up to three other devices. I've sent texts with it on my iPad.
It was easy to set up with both my laptop and iPad. All I needed to do was enter in an on-screen code which, pardon the pun, popped up at the pairing stage.
I've looked at the online reaction to both the mouse and keyboard. One of the surprising things I've noticed is that some of the reviewers I've watched dislike the yellow and black 'Blast' colours and have opted to go with the 'Daydream' colours which come in a lilac, green and yellow. In my opinion, it is second-best, I like the colour scheme I have with these two items.
Check Out The Logi Pop Mouse On Amazon UK
Check Out The Logi Pop Keys Mechanical Keyboard on Amazon UK
Posted by David Taylor at 12:00 AM