In a few hours from when this post is published, Vader will be posthumously inducted into WWE's Hall of Fame. To honour the moment, I have spent the past few days reading his autobiography.

Vader, or - Big Van Vader - as he was called when I first started following his career, was one of the major names in pro wrestling during my childhood. He was even the WCW World Champion, and defended the strap against the British Bulldog, when I went to my first WCW event.

As for the book - I found most of it interesting as it allowed me to learn about some of the things which went down during his runs in both WCW and the WWF. Unfortunately, there were parts of the book I felt needed some attention in regards to editing and fact-checking.

One example, which stood out to me, was the chapter in which Vader wrote about the scissors fight between Arn Anderson and Sid Vicious which took place in the early hours of October 27th 1993 when WCW was on its Halloween Havoc tour.

I know a fair bit about the fight because I had seen WCW hours before it occurred. I also know enough about the remainder of the tour. With both of the wrestlers shelved, the company was forced to change line-ups.

According to Vader, some of the dates were cancelled because of the fight. This is untrue.

Furthermore - later in the book, Vader recounts the match against Cactus Jack (Mick Foley) in Germany which resulted in Foley losing his ear after becoming tangled in the ring ropes. Vader, or his ghost writer, claimed that this match took place on the same tour as the stabbing incident.

That is also not correct. The match was part of a German tour which took place during the spring of 1994.

I know it's nit-picking on my part. However, when I know for sure that certain details are inaccurate in anything, it makes me question things I am not clued in on.

Gripes with editing and fact checking aside, I found Vader's story interesting I enjoyed reading about his childhood and part of his football career. His exploits in Japan - where there is no question he found the most fame - is also given a lot of detail. I just hope that most of what I read is the truth and not misuse of authorial licence by the writer/s. 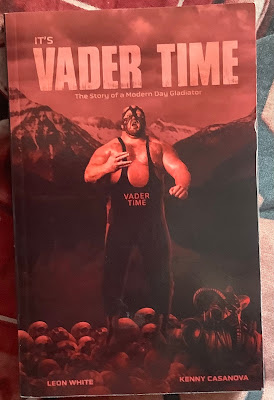 Buy It's Vader Time by Leon White on Amazon UK
Posted by David Taylor at 12:00 AM