June Brown, who played Dot Cotton in Eastenders, passed away over the weekend. She was ninety-five years old. 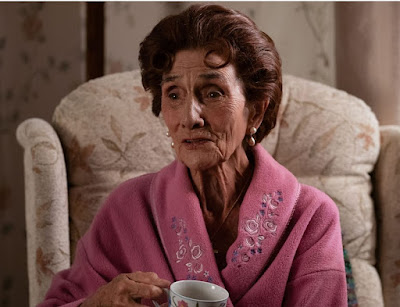 Dot Cotton is arguably one of the greatest characters in British soap opera. Brown portrayed her incredibly well.

As I think back, a few episodes stand out to me. I remember one with just Dot and Ethel Skinner. I cannot recall if it aired in the late-80's or early-90's. However, the entire thirty minutes featured only those two characters.

I remember it because someone had complained about it when I was on the bus the following morning. I - on the other hand - thought it was a cool idea just to feature two characters in that way.

There was also the episode years later, once again featuring Dot and Ethel, which wrote Ethel out of the series. I cannot recall if that was with just those two in the episode, but - as I sit here writing without doing any research - it wouldn't surprise me.

I have not watched Eastenders regularly in many, many years. With that said, I am aware that Dot was a key part in one of the most recent anniversary celebrations when she wouldn't help her son - Nick Cotton - when he was from his heroin addiction. It was a symbolic death considering the very first episode began with a group of Albert Square residents breaking into that very same room to find a dying Reg Cox.

Nick Cotton was later revealed to the audience as Cox's killer.

You cannot write about Dot Cotton without mentioning Nasty Nick. You also cannot mention those two without referring to Nick's 'Hello, Ma' lines that would be said almost every time he came back out of the woodwork. I mention that line because it would not surprise me if any of the tabloids have written about Brown's death with two words - 'Goodbye, Ma' - as the headline.