Arsene Wenger's My Life In Red And White

I want to make one thing clear. It's something I've written on this blog at least twice in the past, but it is worth repeating.

I am not an Arsenal fan.

However, I have always respected the club's most iconic manager - during my lifetime - Arsene Wenger.

I have recently read Wenger's autobiography - My Life in Red and White - and I was not disappointed.

Wenger was such a great manager for the Gunners. His book not only covers his career during his twenty-two years in charge at Highbury and then The Emirates Stadium. It also covers his early-life and career before travelling to London during the autumn of 1996.

The latter part of the book sees Wenger comment on his post-Arsenal life working for FIFA. 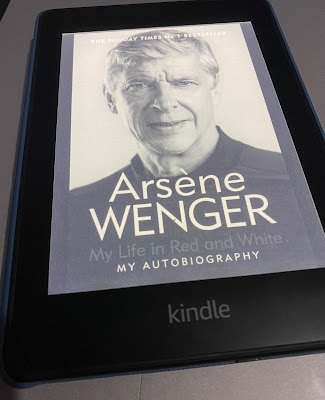 One of the most fascinating things about Wenger's time at Arsenal - which I had known about before reading his autobiography, but is covered in its pages - is how the coach introduced stats analysis and changed the dietary habits of his players.

This is common in professional football nowadays, which shows how ahead of the curve Wenger was.

The title of the book - My Life in Red and White - is also a nice touch considering every single team he coached had red and white colours in their kit.