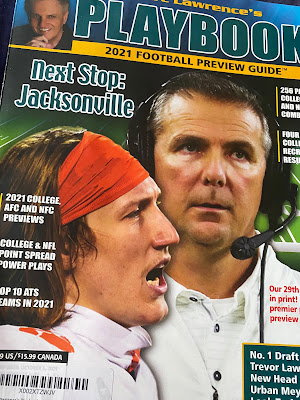 I ordered Marc Lawrence's Playbook 2021 Preview Guide on the American Amazon website - from a third party seller based in Las Vegas - on July 1st and it arrived at my door five days later.

This is a title I have written about many times in the past. I purchase the book each year ahead of the new NFL season, but it comes at a hefty price due to taxes and postages. Still - I find the information in it to be a HUGE assist when it comes to gambling on the NFL.

I do have some complaints about this year's edition, though.

On each NFL teams' page, there are boxes with the results of the last ten seasons. I found some typos and incorrect scores in the boxes for some of the 2020 season.

Even worse, they didn't even bother to distinguish where each playoff game was played. I like to use these boxes to work out which teams will be looking out for 'playoff revenge' and part of it is to determine whether they were upset at their home stadium.

Of course, I could work it all out myself - or could just use my memory - but that's missing the reason why these boxes exist in the book, isn't it? It should be easy for the reader.

I don't want to end this post being overly-critical, though.

These annuals have been a handy tool each year since 2009 and the seemingly rushed job for 2021 will not put me off from anteing up for the 2022 edition around this time next year.