In a short follow up to June 25th's post titled 'The First Mag of the 2021 Season', I now have a second magazine to my pro football reading list for the upcoming season.
Lindy's Pro Football Guide arrived here on Saturday morning. It very well couldn't have.
You see - a few weeks ago, I received the email alert to tell me that the magazine shop that imports American football yearbooks had stocked up on the 2021 edition of Lindy's guide. I wasn't at my PC when the mail arrived, but I was able to click on the link within ten minutes of its delivery.
The cover was Indianapolis Colts themed with Jonathan Taylor the key figure.
That was the first thing I noticed. The next was the indicator informing me that it had sold out.
I put my name back on the list to be informed if, or when, the stock would be replenished.
The good news came in the middle of last week. I caught the email as soon as it arrived, I clicked the link to get to the page. Once again, it was listed as having sold out. I checked the time of the email and compared it to the actual time.
It had apparently sold out within a minute.
I replied to the email with an 'it sold out in seconds!' I received a reply a few hours later with a link asking me to try again.
And I secured my purchase.
As noted, the magazine arrived on Saturday morning. However, it wasn't the cover I had set my hopes on... 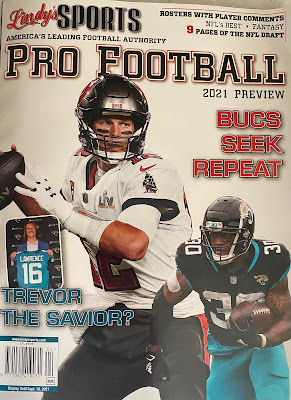 It was a Tampa Bay and Jacksonville Jaguars themed cover with Tom Brady prominently featured.
The inside has the same content, so it isn't an issue. It's just funny how Brady is already haunting me before a ball has even been kicked in the 2021 season!
This is the twenty-sixth year since I first came across Lindy's football yearbooks. They're always a good read ahead of the NFL season.
Posted by David Taylor at 12:00 AM