I did something yesterday that I had been putting on and off for well over ten years.
I purchased an Amazon Kindle.
The reason why I hadn't anted up and bought one before yesterday is because, whenever I would entertain the idea of buying one - usually on Black Friday or Amazon Prime Day - I would conclude that I have enough real books to get through and I should wait until the next promotion day.
The same thought process and resolution would then be reached on that promotion day. And it would repeat and repeat and repeat.
I had recently found myself in possession of some e-books of pro wrestling autobiographies and thought that I had no reason not to get myself a Kindle when Amazon Prime Day was announced for this week.
With that said, I still took some time to think things through. I finally made the decision at 7:30AM yesterday morning.
It arrived a little over twelve hours later. Incredible 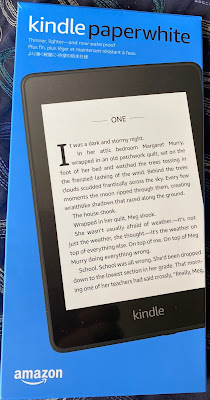 As you can see, I opted for the medium of the range Kindle - the Paperwhite.
I had quite a hectic day yesterday. By the time the parcel arrived, the football had started so I made the decision to set the Kindle up this morning.
The first thing I saw when I took the device out of its box was this: 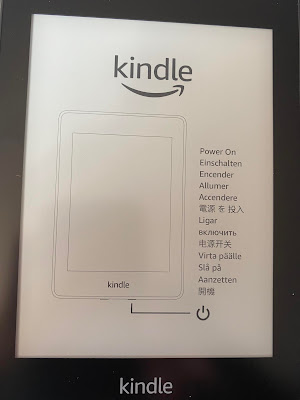 I assumed that it was a sticker, but it was the screen itself!
Setting the Kindle up was quite easy although it took two attempts to get connected to my Wi-Fi. That was resolved in seconds, though.
After linking the Kindle to my Amazon account, it asked me to tick off the genres of books I like to read and then I was asked to put ticks next to books I had read as a way to gauge my habits for recommendations.
It gave me a few sample pages of current titles. One of which was Barack Obama's autobiography. I read a few lines of it and decided to charge the Kindle up before I start getting to work on my library.
My device came in a set with a charger plug (you only get a USB cable if you buy the Kindle on its own) and a cover. As of right now, I am still waiting for the cover to arrive (it's due on Thursday).
I'll give it a few weeks and then write about how I am taking to it. As someone who prefers physical media over digital, I don't know how this will go.
Buy Kindles On Amazon's UK Website
Posted by David Taylor at 10:42 AM