A week ago, I published a post in which I mentioned that I had tried Iceland's Space Raiders potato shapes.

The flavour I purchased was the 'Pickled Onion' variety. I have now tried the other flavour in the range: Beef. 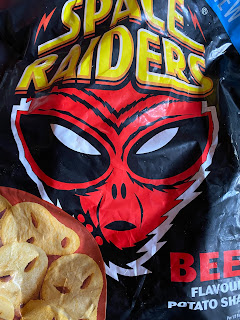 I made the right choice to start off with.

Pickled onion had more flavour. The beef version was lacking in a strong beefy taste, which you would expect if you've tried the Space Raiders potato snacks that these potato shapes are related to.

Still - I've tried both of the flavours now, so I can tick them off my list.