A friend from the USA gifted me a handful of drink powders - among other things - for my birthday a few weeks ago and I thought I would do what I did earlier this year with bottles of Calypso Lemonade and rank them to work out which flavour I liked the best.
All of the powders can be found in the picture below. I'll write about each powder in their order of appearance in the photo starting with the Berry Blast Typhoon flavour of Hawaiin Punch.
The drinks will be rated out of five stars. 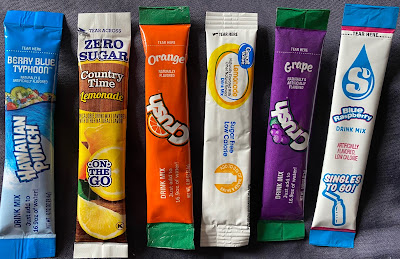 Hawaiian Punch Berry Blue Typhoon
I have a huge bottle of blue coloured Hawaiian Punch here at home, but haven't opened it yet. The reason why I mentioned it is because the Hawaiian Punch drink here is also blue, but I am not looking forward to trying it now. This is because I found the powder drink to be lacking in flavour.

Country Time Lemonade
This tasted just like traditional lemonade you find in supermarkets. I prefer that sort of lemonade to regular varieties, so this gets two thumbs up from me.

Orange Crush
Of the six powders I sampled, the Orange Crush sure was the brightest! It had a nice flavour, but it wasn't as strong in taste as the other Crush drink I tested (see below).

Great Value Lemonade (Walmart)
As I mentioned above, the Country Time Lemonade reminded me of traditional lemonade and I liked it a lot. This lemonade powder, from Walmart, was very similar. And that means I have to give it an identical rating.

Grape Crush
During my childhood, when my American relatives were based over here in Europe, I would visit them and get to try American sweets and drinks. Something I noticed from those treats was there was an abundance of products with a grape flavour. It was very rare back then to find anything grape flavoured back home, so I found anything with that ingredient to be the most appealing. Here we are many, many years later and I find myself pouring powder into a bottle of water to make a grape drink. The smell brought back some fond memories even before I took a sip. Once I drank it, I knew I had to give this this powder a high rating.