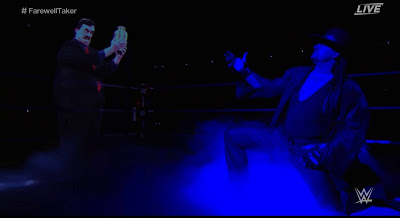 The event closed with, what was billed as, Taker's 'Final Farewell'. It consisted of a plethora of Taker's on and off-screen friends being introduced to the ring. Following that was a video package filled with highlights of the wrestler's career. Once that was over, the cameras returned to the squared circle. In the ring - on his own - was WWF/E owner, and the creator of The Undertaker character, Vince McMahon.

McMahon gave a short speech before The Undertaker made what could very well have been his final ring entrance.

Taker then cut a promo as you would expect from the Deadman and there was a brief moment when he genuflected with his hand out - just like what he would do to draw power out of the urn that his manager, the late Paul Bearer, would be carrying - and a hologram of his friend was beamed into the ring.

I thought it was a nice touch.

However, apart from seeing the old wrestlers congregate before the video package and the Paul Bearer hologram, I thought it was quite a poor send-off.

Sure, it didn't help that it was being done in an arena filled with fans on video screens rather than being live in-person.

It was a case of it being the right and wrong time to do this kind of celebration.

It was right because it was exactly thirty years to the very day that The Undertaker debuted at the Survivor Series of 1990. It was the wrong time because the lack of a real audience made it feel - if you pardon the pun - dead.