I came across something peculiar whilst looking through the Asda website over a week ago. 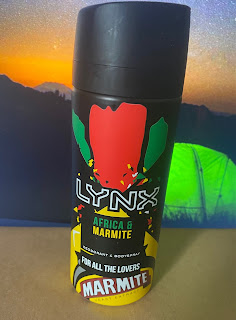 Yes, your eyes are not tricking you. You have just seen a picture of Lynx Africa and Marmite.
After seeing it on the website, I immediately added a can to my shopping basket. I had to try it out for a laugh.
I've been wearing it for over a week now.
When I first took a whiff, after spraying a bit on my palm, I couldn't smell the Marmite. All that was there was the Africa that - as I wrote earlier this year - has never been a Lynx scent I've particularly liked.
The following day, I used the spray as per normal and - as soon as it hit my body - I could absolutely smell the Marmite more than I could the Africa.
From there, it was weird. I'd be sitting here and smell the Africa. Then, moments later, my nose would sense the Marmite with no hint whatsoever of the other scent.
And vice versa.
As noted, I have been wearing it every day since I first tried it. I must have grown used to it now because, other than still smelling more of Marmite when I first use the spray at the start of a day, I haven't noticed the confusion of scents as the hours have gone by.
When I first showed my friend the picture from the Asda website, she joked - by playing on the slogan for Marmite- that I would either love it or hate it.
I'm still on the fence right now.
Posted by David Taylor at 12:56 PM