It has been over a week since I wrote about watching an episode of the children's game show - Runaround - for the first time since I was a very young boy.

I thought I'd revisit the topic for one last time because, in the aforementioned post, I closed by stating that there was another memory of the series that flooded back when I watched the episode over a week ago.

Those who may remember the series are sure to know that the children would stand in semi-circle compartments before they're asked a question by the show's host - Mike Reid.

The thing that caused me to remember a childhood memory was seeing the kids inside the compartments.

My grandmother used to have an aid to help her stand in the shower. I vividly recall that the part in which my nan had to lean against was shaped exactly like the semi-circled pods the children in the game show stood in.

I remember this time. It could have been many times, actually. When this aid was not in use and I would pretend to be playing Runaround with my nan telling me to 'Guhooooo!.. and Runaround' just like Mike Reid would with the kids on the show.

It's one of the few memories I have of my grandmother. I'm glad that watching the episodes have reminded me exactly why the shower standing device (or whatever you can call it!) was the reason why we pretended to play Runaround. 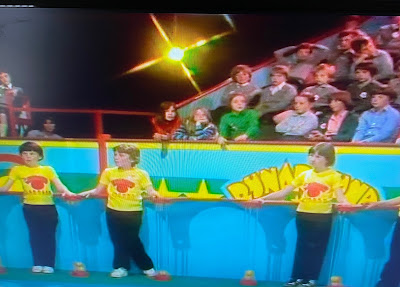