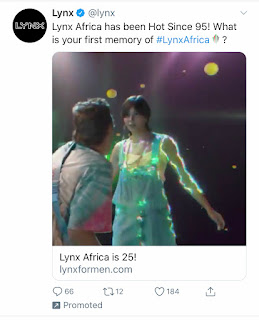 While browsing Twitter in the early hours of this morning, I came across a promoted tweet from the Lynx deodorant company.

It is celebrating the fact that it has been twenty-five years since its Lynx Africa scent hit the shelves.

The tweet asked people what their first memory of Lynx Africa is.

It should come as no surprise to those who know me well that I actually do remember when Africa first came out.

I can vividly recall wearing it to school for my final year. I especially recall having it on shortly after it was released and asking a South African friend of mine whether he would wear it considering it's named after where he was from.

It was a dumb joke!

Anyway, with the tweet in my memory, I noticed that my nephew had a can of Africa in the bathroom this morning after my shower.

I decided to steal some of it - for old time's sake.

The thing about Africa is it isn't my favourite Lynx scent. It never was. There's a list of discontinued fragrances from the Lynx brand that are, or were - in my opinion - superior to Africa.

I have better first memories of those cans, as well.

The deodorant and underarm roll-on gift set for the Oriental scent was the first 'adult' toiletry gift I ever received. This would have been a Christmas sometime in the early 1990's.

And then there was Lynx Nevada. I remember that one came out in 1992. My mother bought me a can of that to spray for my Confirmation.

Tempest is another I liked. I don't have a first-time memory of it, but it sure was a go-to scent until that too vanished from shelves never to be seen again.

So, yeah, happy birthday Lynx Africa. You're lucky you lasted as long as you have. I miss your brothers more.
Posted by David Taylor at 3:32 PM