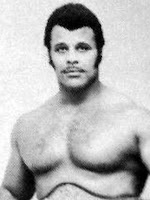 He was a pro wrestler, but - when he was growing up - he trained to be a boxer and even sparred with eventual legends like Muhammad Ali and George Foreman.

Johnson spent most of his career working for the NWA. However, he made the move to the WWF and made history in 1983 when he and Tony Atlas won the WWF World Tag Team Championship as they were the first black tag champs.

He retired from active competition in early 1990s.