On September 17th, I published a post titled 'Nice Surprise'. In it, I wrote about finding the entire collection of 21 Jump Street episodes on the Amazon Prime Video streaming service.

I've written numerous times on this very blog that 21 Jump Street was my favourite television show when I was young.

The programme made its way to UK screens in the autumn of 1989. It was only weeks after we had our very first satellite dish and I would religiously watch it at 7PM every Sunday evening.

Another series that eventually found its way to Sky TV (possibly at 8PM on Sundays) was the 21 Jump Street spin-off, Booker.

It starred Richard Grieco as the title character - Dennis Booker.

We were first introduced to Grieco's character in the third season of Jump Street, but - in Booker - we caught him after he had quit his job as an undercover cop and was, instead, working as an investigator for an insurance firm.

I'll be honest - I wasn't a fan of the series. I watched many episodes, but cannot recall if I watched the entire run.

Anyway, the reason why I'm going on about Booker today is because - when I found the 21 Jump Street seasons on Amazon a few months back - I did a search for 'Booker', but my search didn't find it.

However, when I was browsing the list of programmes available for Amazon Prime customers late last week, look what popped up: 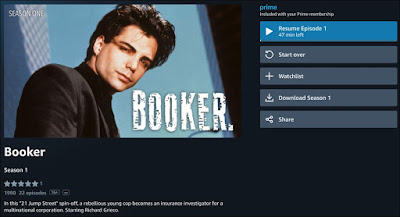 Like I said, I wasn't THAT much into the series. I was ten or eleven years old, though. When Christmas and the New Year celebrations are over, I might give this programme another chance.