The fantasy football team I entered into the £9 contest yesterday didn't do too badly.

When I write 'didn't do too badly' I mean it made me profit.

I finished off with 168.72 points when all was said and done. I ended up getting £25 back by finishing in the money.

My position was 6,954th out of 165,344 entries. Seems insane to finish in that place and still walk away with something!

As a Colts fan, I despise the New England Patriots. This bias often means I don't play anybody from that team. I made the decision to have Tom Brady as my quarterback and New England as my defence.

I doubt it would have made much difference, but I did have Tampa Bay's Jameis Winston as my QB before I told myself I should play Brady considering he was up against the Bengals.

Winston had a great game with 458 passing yards and four touchdowns. I don't know how many points he would have had in the contest I played in, but - in the regular NFL Fantasy game - he had 32.72.

It might have put me in a higher payout zone... maybe the decision cost me the chance of winning an extra fiver! 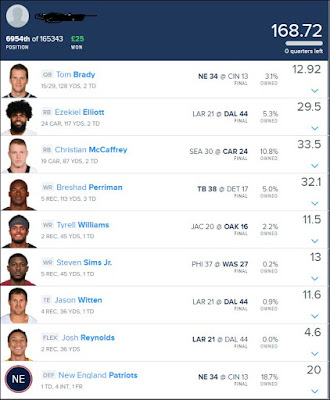