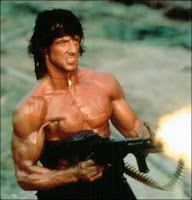 I kid you not, Sylvester Stallone tweeted about it the other day and wanted people to use the hashtag #RamboDay to share their memories of the movie character.

Well - to be fair - I should also should point out that John Rambo was first and foremost a character from a novel.

First Blood was written by David Morrell ten years before Sylvester Stallone brought the first movie to the silver screen.

Just like with Rocky Balboa, John Rambo is one of a few movie characters I associate with my childhood.

First Blood came out when I was three years old. I cannot recall when I first watched it. However, I know for sure that my introduction to the series of movies was when Rambo: First Blood Part II was released in the mid 1980s. 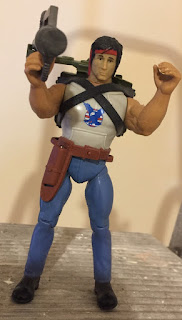 My classmates loved the film. From there, I went back to watch the first movie and - if I'm to be honest - I didn't like it as much as the second. This thought has now changed as I have matured.

Somewhere along the way, a Rambo cartoon series came out over in the USA. I don't even know if it ever made its way to these shores, but what I do know is the toy line associated with the animated show did.

My mum bought me a Rambo figure while we were out shopping at a department store.

Another memory I have of my Rambo fandom is having the poster of Rambo III (I won't start a full rant about how the Rambo movie titles don't make sense... but, I still stand by opinion that it should have been called First Blood III!) on my bedroom door. It was given to me by a man who owned a video rental shop near me in the late 1980s. He would give me all his old posters once he had finished using them in the shop and the Rambo III one was my second favourite gift he gave me. The first being a cardboard stand thing for A Nightmare on Elm Street III.

I was a young man when the fourth movie - Rambo (I'm holding back on the title rant!) - was released in 2008. By then, I had grown out of Rambo, but was still very much a Rocky Balboa guy. Despite this, it was still cool to see the character back.

And it's cool once again to see Rambo return in Last Blood, which comes out later this week.

Ah, Last Blood - finally, we get a First Blood sequel that seems to have a correct title!
Posted by David Taylor at 11:31 AM