I Write About My Passport Renewal

No, this isn't a post about Brexit - it's about the three years or so that I've spent without having a British passport.

I finally needed a passport, so I tried the online renewal service using a camera phone picture of myself and thought I'd share my experience.

I made my online renewal application on Sunday July 28th. I had taken a photograph against a plain coloured background in my home and uploaded it when it was requested.

After completing the online questions (they wanted to know if I had lost my old passport, what the passport number was etc), I was told the process would continue once I sent my old passport to them. I did that the following day.

At 12:35PM on July 31st, I received an email to notify me that they had received my old passport and would get in touch if they needed anything else.

Well, they did just that because - three hours after that - an email came to inform me that the picture I had uploaded was rejected. The reason was because there was shadow on my face.

I tried a new photograph. This time I had a desk lamp shining on me from the my stairs (it was a nutty setup but it was desperate times!).

After finally getting a picture I was happy with, and was hoping the Passport Office would be happy with, I uploaded it. This was within an hour of receiving the rejection email.

I waited a day and then my status was updated to 'Joined Processing Queue' and I remained at this point until the evening of August 8th when I notified that the application was approved.

The following day, I had another mail to inform me that the passport had been printed and sent and that it would be delivered to me in two working days.

Well, it arrived this morning so it was a day. It probably helps that I live in a city and that's why it came quicker than the ETA.

All in all, it was a much easier experience than having to do everything by paper. It was cheaper this way as well. I lost a day due to the crappy photo I uploaded to begin with, but it took less than two weeks.

I recommend doing it this way if you're looking to renew, but I strongly advise looking up the dos and don'ts about how to take a passport photo with your phone.

By the way, I reckon it would have been quicker had I done it outside of peak times like the summer hols!

Here's how my passport application history went for those who may be looking to see how the process worked out for me: 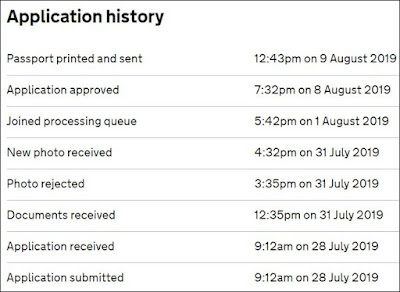