Ever since 2011, I have published an annual post sharing my predictions for the season handicap betting markets that are available every summer ahead of the new league year kicking off.

The results have not been good, but I still place the bets using the systems just to have something to follow along during the next nine months of football.

As I always do before I get to the spreadsheets' results, I'll explain what I do for the Championship down to League 2 and also a different approach I do with the Premier League.


League 2 Projections
The newspaper believes that Mansfield will win League 2 and my spreadsheet has projected that Mansfield's four point headstart is enough to top the handicap table.

Here's the the predicted table I have assembled going by the Racing and Football Outlook's predictions: 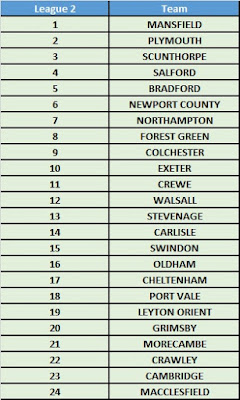 And here is table with the projected points for each team's finishing position along with the handicap points. 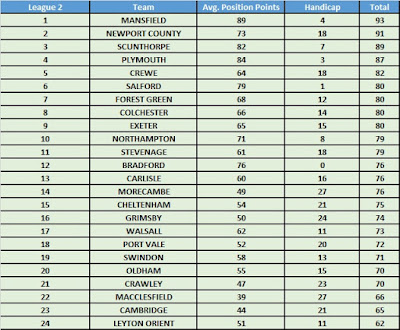 League 1 Projections
Portsmouth tops both the RFO's predicted finishing table and also my handicap prediction table as the team's five point head-start added to the estimated finishing points makes it a total of ninety-nine.

Here's how I ranked the league following the predictions of the paper. 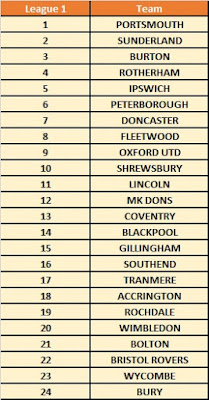 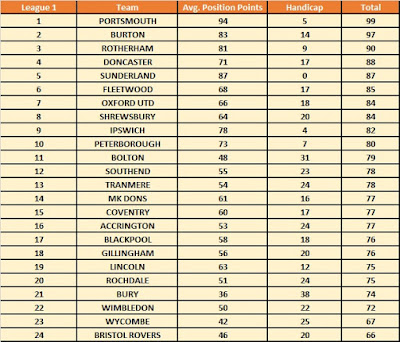 Championship Projections
The Racing and Football Outlook has Preston to finish in third place of the Championship and, as a result, this means that my predicted finish table for the league has the team finishing with a predicted eighty-seven points. 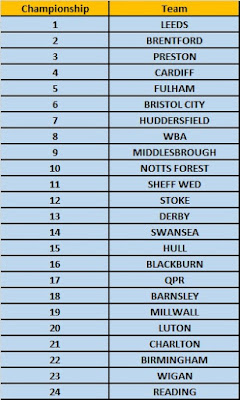 Preston have eighteen points on the handicap, so - added to the projected finishing points - the spreadsheet has them winning the handicap table with 101 points. 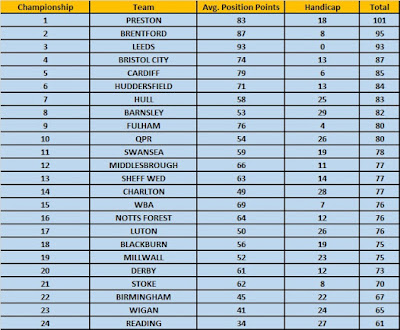 Premier League Projections
I do not like how the Premier League handicap table has worked out as Newcastle United are top with ninety-three points. Forty-six of those points are from the handicap.

Crystal Palace in second place also doesn't fill me with confidence, but I'd rather take them than Newcastle! 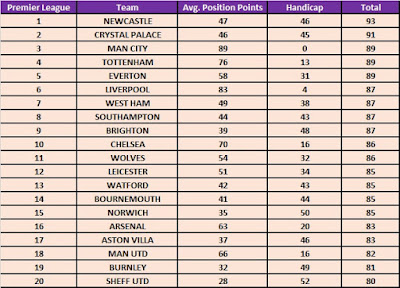 My Bets
I have placed an each-way Lucky 15 on the following teams.

As I always state at the close of each one of these posts, this is just for fun to have something to look out for during the season.
Posted by David Taylor at 12:00 AM