I watched Creed II the other day.

I must start this off with a preface. As a child born in the late-70's, I grew up watching - and loving - the Rocky movies. It's a controversial opinion, but I also have a lot of time for Rocky V, the movie that Sylvester Stallone is now on record as saying he wished he hadn't made.

So.. this Rocky fan is not going to dislike the expansions from the Rocky films. And rightfully so. The first Creed movie was great.

Creed II - in my opinion - is better.

Just like the original Creed, the movie has a few shout outs to previous Rocky movies. There's little things like Adonis Creed and his girlfriend - Bianca Taylor - having a baby just like Rocky and Adrian did in the first sequel, Adonis not winning the first fight against the movie's baddie but coming back to win in the end (I'm going to say that's a nod to Rocky III). 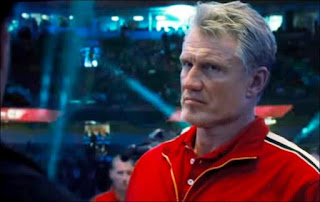 There are a lot of nods to Rocky IV as well. And this should not come as a surprise when considering this series of movies is about Apollo Creed's son. Apollo was killed in the ring by Ivan Drago in the fourth Rocky movie. In this film, Adonis' antagonist is Viktor Drago - son of Ivan.

One of the themes I took away from the movie  is that it's a redemption story for Ivan Drago.

It starts off showing Drago training his son in conventional ways like waking up early. This is far away from the 1985 visual we had of his hi-tech Russian training regime (also - don't forget the steroids!).

The Dragos are now living in the Ukraine. We eventually find out that Drago was ex-communicated by Russia and eventually his wife, who was played by Brigitte Nielsen in Rocky IV, in shame after losing to Balboa in 1985.

Ivan sees Viktor as his way back.

After a close disqualification loss to Adonis, Viktor's agent wants a rematch. Only - this time - they want the match in..

Yes, after the first match, Russia welcomes the Dragos back. Even Nielsen's character of Ludmilla shows up at a banquet for her son and ex-husband. I didn't know she was going to return for the movie, so this was a welcome surprise to me when she appeared on the screen.

Over in the US, Rocky - who had a dispute with Adonis before the first Drago fight gets his protege prepared by sending him out to a desert to do unconventional training. I loved this spot because it was a juxtaposition of the methods Rocky did when he was preparing to face the elder Drago in 1985. Rocky's training took place in snowy Russia while Creed's took place in a sunny desert.

You can also tell - in certain parts of the movie - that Rocky still bears the burden of not throwing in the towel to stop the fight between Apollo and Ivan.

This burden is what brings things full circle and redeems Ivan.

In the final fight of the movie, Drago is being beaten by his opponent. His father looks behind him to see the Russians - and Brigitte Nielsen's character - give up once again. They leave their seats in the arena. Visually, we know that the Dragos are once again down on their luck because they've been ex-communicated.

It was at this point I thought to myself 'Oh, I know what they're doing here... Drago is going to throw in the towel!'

His son got up.

The fight went on a little longer and then we had the moment when Drago got onto the ring apron and finally threw in the towel.

His son wasn't happy with what was done, but Drago reassures him they were going to be okay.

I didn't think I would ever feel sorry for Drago, but I did. He was one of the biggest movie villains of my childhood, but it was kind of ironic that, in the end, he turned out to be just as much of an underdog as Rocky Balboa.

I loved this movie just for that. The film is obviously all about Adonis and Rocky but Drago's story is what made it great.

Creed II is right up there as being one of the best movies in the Rocky/Creed franchise.


Buy Creed II from Amazon UK
Posted by David Taylor at 8:27 AM