On Friday, I wrote about Morrisons having created a limited edition Yorkshire Pudding Pizza and noted that, if I could get my hands on one, I would try it.

Well, look what I had for dinner yesterday evening: 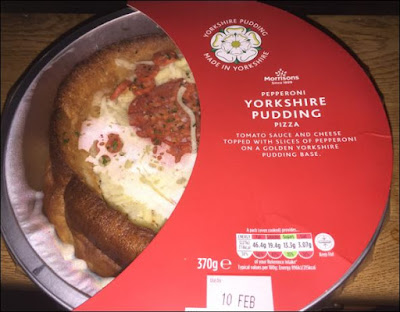 As I wrote on Friday, there are two flavours. One is a meat feast and the other is pepperoni. I chose the latter. 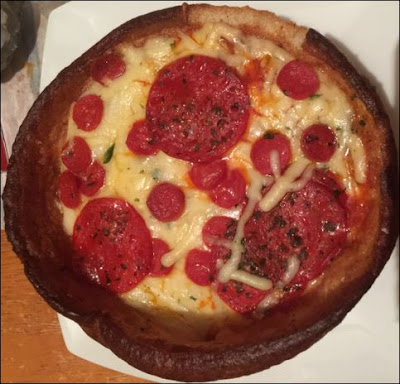 After cooking it, I started to have doubts whether I'd like it or not.

What helped it a lot was the sauce inside. It didn't taste like tomato puree you would expect from regular pizzas you'd find in a supermarket or a restaurant. This tasted more like a thick tomato soup.

In fact, it didn't taste like a pizza at all. It was as I stated above - more like a tomato soup.

A cheesy tomato soup, with pepperoni, which happened to be cooked inside a Yorkshire pudding base. Not that there is anything wrong with that. It was an intriguing idea that I wanted to try out.

I didn't dislike it. I won't go so far as to say I'd want to eat another one, though!

The release of these pizzas coincided with National Yorkshire Pudding Day, which was over the weekend. They'll remain in selected Morrisons stores until the end of the month.
Posted by David Taylor at 9:00 AM