I Love The Munsters

If I had to make a choice out of watching an episode of The Munsters or The Addams Family, it would be an easy decision to make.

It's The Munsters without question.

The first time I ever came across Herman Munster and his family was sometime in the 1980s when a Munsters movie came on our TV. I believe it was being shown on Channel 4 during the school holidays.

I soon began to learn that The Munsters was a TV show from the US. Within a few years, I had caught a few episodes here and there but it was The Addams Family that - in my opinion - seemed to get the most coverage and fans over here in the UK.

As a true fan of the underdog, I stuck to The Munsters in the battle of the undead families. This is despite the poor The Munsters Today remake that used to be on Saturday afternoons over here in the 90s.

The reason why I'm writing about  Herman and his family today is because it's Halloween. I usually write about a movie that I've watched for today's post, but didn't get around to it. Instead, I settled for... 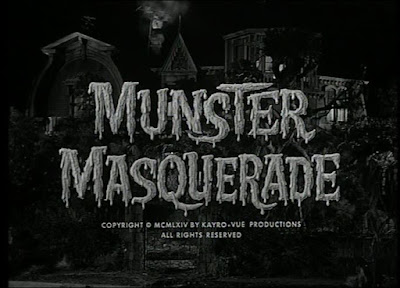 ..the first-ever episode of The Munsters.

I bought two box sets of season one and two a while ago and decided to wait until Halloween to start watching them.

Even though it has been many years since these episodes were first broadcast (I believe it was 1964) some of the gags made me laugh.

The story started with Herman and Lily Munster's niece, Marilyn, being invited to her boyfriend's parents' masquerade party.

The boyfriend's father dressed as Frankenstein's monster. This lead to the build up to the conclusion of the episode when Herman wins a prize for the best dressed after they take off his mask to reveal...

..what the hosts, and non-Munster family members, believe to be a 'mask underneath'.

It ends up with Marilyn being offended by the hosts as she felt they had insulted her uncle by saying he was wearing a mask. This made me laugh even more because, in the part I noted above where Herman met the father, Herman thought the host wasn't in make-up, noted that he looked familiar and was surprised that the father hadn't dressed up for his own masquerade party. Thus insulting the host shortly beforehand!

The innocence of it makes it all the more hysterical.