Chelsea not only won the Premier League in the 2016/17. The team also won the bookmakers' season handicap market.

Heading into the season, the Blues were given a five point head-start in the betting markets where teams start off the season with points from the bookie.

The team gained ninety-three points in the actual league. Add in the five that the bookies gave the side ahead of the season, and they finished up at ninety-eight.

Just like in the real league, Tottenham Hotspur finished in second place with ninety-four points. They started off the year with an eight point head-start.

Liverpool and West Bromwich Albion came in third place with 85 each. The Reds had seventy-six points in the actual league, West Brom started with forty points. 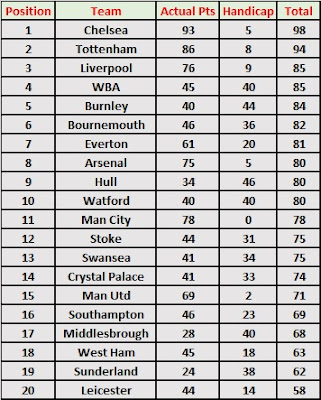 Regular visitors may be aware that I like having a punt on these bets every summer. I took Sunderland with the thirty-eight points this season. What an abysmal choice that turned out to be, eh?

I'll be giving this another ago in August.

If you're reading this post at a later date, you can check any recent updates by clicking on 'Season Handicap Posts' link below.

Season Handicap Posts
Posted by David Taylor at 12:00 AM