Netflix has announced that its series GLOW will be available from June 23rd.

Now, I don't subscribe to the streaming service, but I am certainly going to in time for June!

I've written about GLOW numerous times in the past. The series is a comedy/drama based on the 1980s professional wrestling league  - GLOW (Gorgeous Ladies Of Wrestling).

The key trivia note here is that the original GLOW was the first thing I watched on our home satellite TV when it was installed during the summer of 1989. It used to be on every Sunday afternoon on the Lifestyle Channel and I used to watch it religiously.

I was ten at the time and fell in love with the zany characters that the producers created. It is cheesey, American 80s at its very best.

My favourite wrestler from the league was a lunatic who would wear an ice hockey mask to the ring and carry around baby dolls. Her name was Dementia. Even back then I thought the baddies were cooler than the babyfaces!

I cannot wait to see how the series is. I know that Alison Brie is the main star of it and I welcomed that news because I enjoyed her in Community.

If you have no idea about GLOW the 80s wrestling show, I urge you to look over at YouTube. You will find some funny stuff over there. The wrestling wasn't great, but the characters and comedy in it was brilliant for its time. Go on, check it out!

And if you can't do that, just check out the picture below. It slightly gets over my point about it being campy 80s Americana... 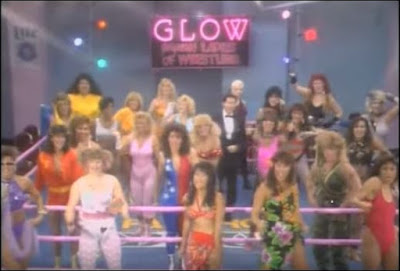