Another person who was associated with pro wrestling died at the end of last week. 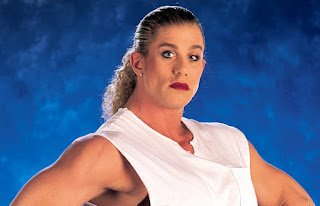 Nicole Bass, who was famous for her short stint in the WWF in 1999, had a stroke at the beginning of the week and passed away late on Friday night. She was fifty-two years old.

Bass was a bodybuilder who ended up working in the WWF as a bodyguard kind of character for Sable. I assume it was building to a feud with a fellow bodybuilder-turned-wrestler in Chyna, but it didn't get there.

Following her cup of coffee in WWF, Bass worked for other wrestling shows and continued with her appearances on the Howard Stern Radio Show. She would be on there occasionally because of her unique look. I recall seeing an episode once where they had her on the show to deny that she was really a male.

I sort of see a lot of similarities with her and Chyna, who passed away last year.
Posted by David Taylor at 9:00 AM