George 'The Animal' Steele passed away on Friday.

The wrestler is most famously known for his time in the WWF during its initial boom period in the mid-to-late 1980s. 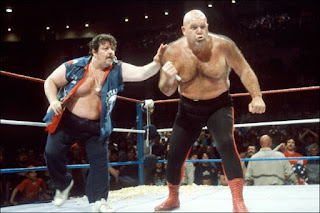 I first came across him around that time and thought the character was quite peculiar. He was bald, yet had hair all over his body and would take a bite out of turnbuckles resulting in foam going all over the place.

With a character like that, you'd think that's what intrigued me the most about him. Not exactly. What I found the most interesting about Steele, or rather Jim Myers, is he was also a qualified teacher.

I used to know a person who did an Internet radio show where he interviewed wrestlers. This was in a time before podcasts were popular. One of the guests that I can recall on this show was Steele. He came across so well on it and it definitely left a mark as it was here that I learned about his other life as a teacher.

Another part of the interview, that I already knew about but still found engrossing nonetheless, was when he spoke about his time working on the Tim Burton movie, Ed Wood where he played the part of Tor Johnson - a wrestler who acted in many of Wood's movies.
Posted by David Taylor at 12:00 AM