The first thing I did when I woke up this morning was ask Siri an important question (well, it was important for this blog): 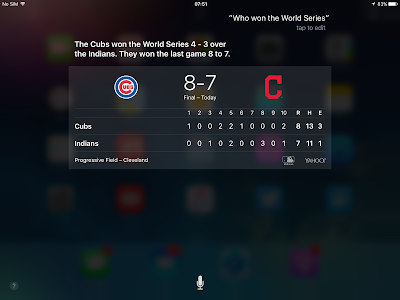 The writers of Back to the Future II were only one year off from the bold prediction that the Chicago Cubs would win the World Series.

Sure, it would have been even better had the team won it last year, but I'm not complaining. Well - not too much. It's still going to be a unique trivia note that the Cubs did come through a year later than the film had predicted twenty-six years earlier.

Before last night, the Cubs had waited 108 years to win the big one.

This isn't the last post I'll write about the Chicago Cubs. Something happened this morning that was quite funny. You'll have to wait until another time to find out.

That's what they call a teaser.
Posted by David Taylor at 10:07 AM