A couple of days ago, I published a post mentioning that the Chicago Cubs had won the World Series of Baseball and, at the end, I noted that this would not be the last time I wrote about the Cubs. The reason why is because I had something cool - and coincidental - to share.

On Thursday morning, after finding out the Chicago Cubs had won the World Series, I opened a parcel with the latest issue of MAD Magazine in it. I've been buying it a lot lately. Anyway, the first thing I did was open the mag to its readers' pages. The first letter was from a person in Chicago who wrote about how generations of his family were fans of the magazine. 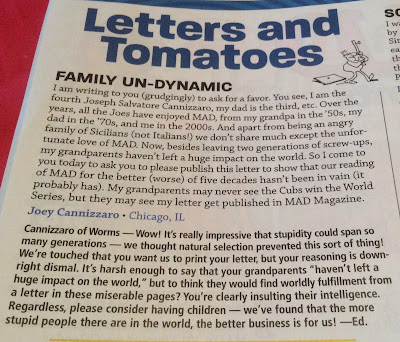 See how he closed his correspondence by writing 'My grandparents may never see the Cubs win the World Series, but they may see my letter get published in MAD Magazine'?

That right there is awesome.

And for it to be the first thing I read hours after the Chicago Cubs won the World Series was crazy.
Posted by David Taylor at 12:00 AM