No Halloween movies this year.

I thought I'd do something a little different and share some images of two t-shirts that I've found myself purchasing during the year.

The first one is a Ghostbusters-themed shirt that is advertising Stay Puft Marshmallows. Here you go: 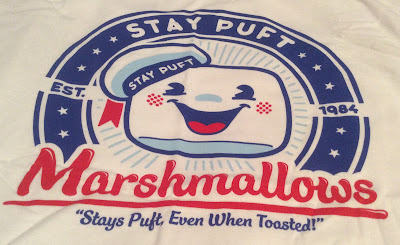 The only thing I do not like about the shirt is the bit that says it's established in 1984. If you recall, in the original movie, Ray mentions having this kind of marshmallow when he was a child. It should have been established in the sixties or maybe even the fifties.

Everything else about it is great.

And then there's this one: 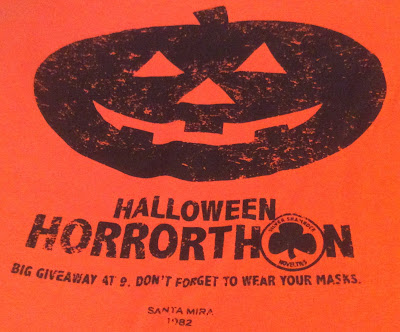 This t-shirt is from one of my favourite horror films from my childhood - Halloween III: Season of the Witch.

It's about a demonic toy maker who created children's masks for Halloween with the intention of killing all the kids wearing them on Halloween night. The trick that he intends to pull on the children is to have them all watching their television sets for the 'Halloween Horrorthon' and the on-screen display sets off a reaction in the back of the mask to kill all the viewers. To be fair, that's just a quick version of the story.

The t-shirt is advertising the aforementioned 'Halloween Horrorthon'. The shamrock logo you see on the shirt is the emblem of the mask company - Silver Shamrock.

I last watched this movie ten years ago today. I wrote about it in the November 1st 2006 blog post.
Posted by David Taylor at 7:00 AM