Over For Another Year And Last Week's Fantasy NFL Result

I was so frustrated to see the Indianapolis Colts lose to the Buffalo Bills last night.

There are so many things I could point out that - had they been done differently - would have meant the Colts would be in the next round of the post-season..

I don't like playing Sunday Morning Head Coach, but - if Frank Reich had played Saturday Afternoon Head Coach - I wouldn't have to point out the ridiculousness of going for it on fourth down when a field goal would have sufficed (the Colts lost 24-27 so they would have at least been at 27-27 in the latter stages of the game had they scored the field goal earlier on), going for two points when they could have gone for a PAT...

Anyway, that's it for another season.

Speaking of end of seasons, I'll finish on something good.

Every Sunday, I've shared my highs and lows playing daily fantasy football. There have been a lot more lows than highs, but I finished the last day of the regular season with a win. 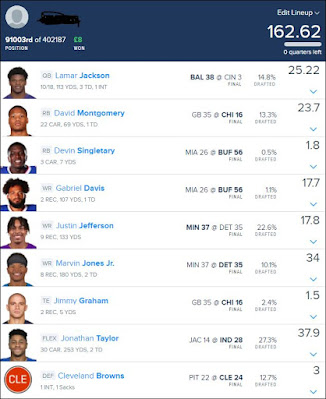