My copy of Super Mario Maker 2 - for the Nintendo Switch - arrived this morning.

I have yet to play it, but thought I'd share a few images of what came with my preorder.

The first image is of the game itself. I decided to purchase the 'Limited Edition' version which comes with a 12 month membership pass to Switch Online.

I am three or four months into my current twelve month pass, so will keep hold of the code until next year.

Now, onto the preorder goodies I had from Game.

The first thing I had was a steelbook. I haven't opened it, and doubt I will, but I surmise there's a little slot inside it to put the game cartridge. 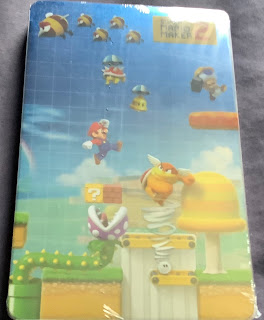 The steelbook might also have a compartment where I can put a Mario Maker 2 stylus that has also been gifted to me with the preorder.

The stylus is on the right (and it's also upside down!). Next to it is a giant Mario Maker 2 pencil as well as a pencil sharpener.

They've given the pencil and sharpener away for players to design their Mario Bros. levels on paper before they put their ideas onto the screen. This leads me to the final surprise. 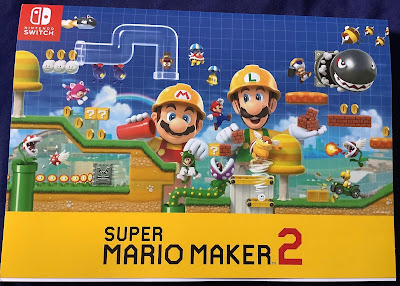 When the postman came this morning, he handed over a large parcel. I thought to myself 'isn't this a bit much for a Nintendo game?', but what made the package larger than I expected was a large Mario Maker 2 drawing pad filled with graph/design paper.

As I said, I highly doubt I'll use any of these things other than the game and the annual pass, but it was really cool to have them as a reward for preordering the game.