I was keen to see the Premier League fixture list for the 2019/20 season when it was released yesterday.

The sole reason why - with Cardiff City not in the top flight this time - was to check out what games are scheduled for Boxing Day.

The reason? Well - for the first time ever, all of the Boxing Day games will be available to view on Amazon Prime.

The streaming platform not only has the rights for Boxing Day, and the day following. It also has the midweek fixtures that are set between December 3rd and 5th.

Take a look at what they have in the image below. There are some good ones on there like the Merseyside Derby in early December.

Of the Boxing Day (or December 27th) games, the ones that stand out - to me - are Manchester United .vs. Newcastle United and also the Leicester City .vs. Liverpool game only because it will see Brendan Rodgers manage a team against his previous Premier League employers. 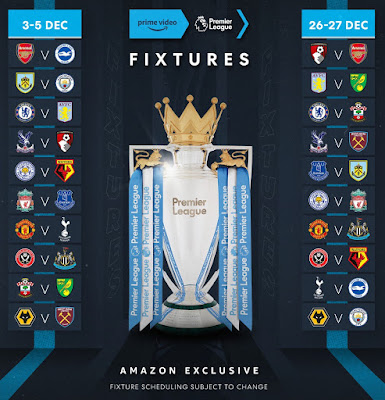