I've just found out that Cornelia Frances has passed away after fighting bladder cancer.

She was a big star in Australian soaps like The Young Doctors and a series that I've written about a lot over the years, because it's my favourite soap, Home and Away. 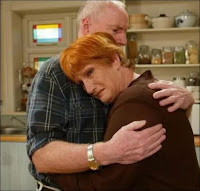 In Home and Away - Francis played the role of Morag Bellingham; sister of the show's longest-running character,
Alf Stewart.

Morag was a regular character for a few years, but became a guest now-and-again in recent years. She was kind of a bitch to begin with, but - in later years - Morag was like a goodie but still had the strong ruthless streak and was often used to come to the aid of characters who needed legal representation.

I'm going to miss her on the show.

Another cool thing about the actress is she was the host of the Australian version of The Weakest Link.

In my opinion, Cornelia was perfect for the role just because of how strong-willed and bitchy her soap characters were!
Posted by David Taylor at 11:26 AM