There is only one person worth writing about today.

And it's this man: 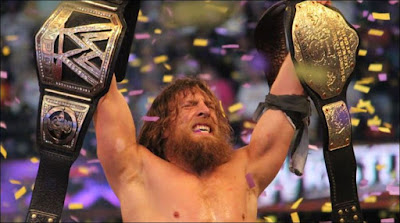 If you're a wrestling fan, yesterday was a very good day.

WWE announced that Daniel Bryan had been given the all-clear to return to the ring.

In early 2016, Bryan was forced to retire from the profession he loved. At the time, it was WWE's doctor that made the call. From that point on, Bryan went to numerous neurologists to get other opinions and even tried special methods to help him.

The result was yesterday's great news. His active career is back on.

It was actually quite emotional watching his promo at the start of last night's episode of WWE Smackdown when he went into detail about how the last two years have gone for him and how he didn't give in.

I couldn't be happier for the guy.
Posted by David Taylor at 10:56 AM