I'm hardly what you would call a 'retro gamer', but I have been reliving part of my childhood the past couple of years.

First, I bought a Nintendo Classic Mini consoles in 2016. I followed this up a later by purchasing a Super NES Classic Mini. 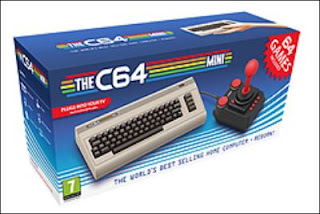 The C64 Mini is a device that contains a handful of games that were once available on the Commodore 64.

I owned a Commodore 64 in the 1980's, so - as soon as I saw this item on the Game website the other day - I was immediately intrigued.

There are quite a few games listed for it. To be honest, I either forgot most of them, or haven't heard of them before. There are, however, titles that I did play/own in the past. They are:

There are games I would have liked to have played again that didn't make the cut. I guess this is due to licensing issues, so I understand. With that said, and as I mentioned in the list, California Games is one of my favourites. That alone is worth part of the purchase price.

In my opinion, of course.