It has been over two months since I last published a 'Scratchin' post where I've been keeping record of a National Lottery scratch card experiment that I've taken on.

Over the summer, I started off with a £1 scratch card. I won a few pounds on it and - instead of cashing in - I purchased more tickets just to see how far my luck would go.

In October, I had a five pound card left and decided that I would wait until close to Christmas and purchase one of the company's festive-themed cards.

I did that this morning. 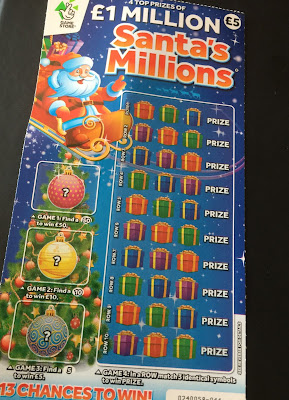 As you can see, I bought the 'Santa's Millions' card. It promised '13 Chances To Win!' on the bottom, so thought I'd use the five pounds on this one.

Yep, the card didn't give me a winner.  This does not come as a surprise. I hardly ever win on the big Christmas scratch cards whenever I've been compelled to have a gamble.

It was fun while it lasted. It only cost me a pound!

I will try this again sometime next year.
Posted by David Taylor at 10:39 AM