Kevin Cadle - the face of American football over here in the UK and Ireland - passed away earlier today. 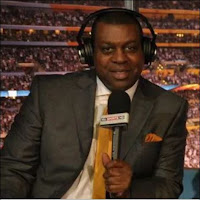 Up until the latter part of the 2015 season, Cadle was the host of Sky Sports' coverage of the NFL.

In my opinion, he was great.

I can't really put into words right now what sort of a presenter he was, but it was kind of like a friend sitting inside the TV on Thursday and Sunday nights. I've written here numerous times over the years - and told him myself - how much I enjoyed what he brought to the viewers and studio guests every time he presented.

Cadle did far more than present American football on these shores. He is the most decorated coach in UK basketball having won thirty titles and eight Coach of the Year honours between 1984 and 1997.
Posted by David Taylor at 12:25 PM