In yesterday's post, I noted how much I enjoy watching the television series - Arrow. It looks like I'll have another programme to watch in 2016.

A trailer for a spin-off from both Arrow and The Flash was circulating around the Internet this week and it looks impressive. 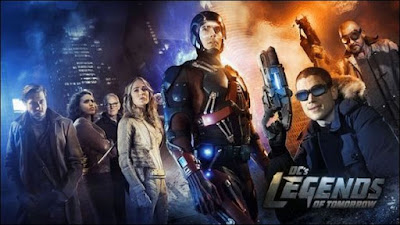 DC's Legends of Tomorrow will bring together some of Arrow and Flash's recurring characters into their own show.

I was surprised to see Sara Lance, a character killed off in season three of Arrow, appear in the trailer. Her alter-ego was the Black Canary. Her new moniker is the White Canary.

Ray Palmer, who was another recurring character from the latest season of Arrow, will be another part of the series. He was last seen being blown up in his lab on the final episode of the current season of Arrow and will now be 'The Atom'.

Other characters like Firestorm from The Flash are in it, too.

I'm intrigued to see how this is received, especially by yours truly. As I have noted on here in the past, I was finding it a struggle to enjoy The Flash for most of its first run. It has started to grow on me.

This is such a good era for comic book themed television shows.
Posted by David Taylor at 12:00 AM