I loved the third season of Cobra Kai. I binged on all ten episodes on New Year's Day.

The previous season ended on a few cliffhangers, so the fallout from those was the focus for most of - if not all - of the third. 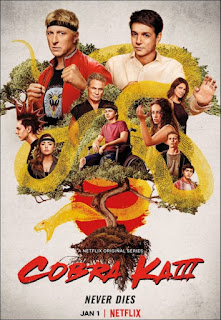 There was a lot of speculation that Elisabeth Shue would reprise her role of Ali from the first Karate Kid movie with many predicting that she would end up being the doctor who helped Miguel (the character who on a staircase at the end of season two).

Well - there was a scene in the waiting room of the hospital and the female doctor's back was turned to the camera. She was blonde and I thought 'oh, Elisabeth Shue is going to be the doctor'. However, the doc turned around and it was not Ali.

I figured right there and then that the tease meant that Shue would end up in a future episode. And she did.

Shue guested in the final two episodes. It was great to see her back as Ali.

As an Karate Kid fan, I get my enjoyment out of the nostalgic aspect of Cobra Kai. So, in season three, I was treated to not only Ali, but  a trio of characters from Karate Kid II.

In a couple of episodes, Daniel returns to Japan and meets up with his girlfriend (Tomiko), his main antagonist (Chozen) and the young girl Daniel saved in a storm (Yuna).

It was fun to see the actors reprise their roles from the second movie. Of the three, I loved seeing Chozen and Daniel together again considering the last time I saw them together was a in a 'fight to the death' in 1986.

Sprinkled across the ten episodes was a backstory to the franchise's main villain - John Kreese. We see him serving for the US in Vietnam and are introduced to a colleague named 'Twig', who I believe will turn out to be Kreese's pal - Terry Silver - who was the baddie in Karate Kid III.

The reason why I believe Silver will return is because one of the cliffhangers of season three saw Kreese phone up someone asking for a favour. Twig, in one of the flashback scenes, is saved by Kreese and the former tells Kreese he'll owe him for the rest of his life.

We've already seen Silver honour that promise by helping Kreese in Karate Kid III, but - considering it's a lifetime deal - the phone call has me sure Silver will be in for season four.

And now begins the long wait to see if I'm right...