Lost In The Desert With Adult Eyes

To completely understand what you're about to read today, you need to learn of its back story.

It was late 1983 and we had returned home from a half-term holiday. Upon our return home, a couple of fire engines were parked up on my road as firemen were seeing to a house fire.

It was our house.

We spent the next few months living in another part of the city, which wasn't too far from home. Mixed in with all the drama of seeing our family home gutted by a fire, my four year old self also had to deal with the loss of my only grandparent who passed away a few weeks after she found out about her home burning down.

Somewhere in this mess of bad memories was another that has stuck with me maybe more than the other two.

For many years, I would vividly recall sitting in the living room of this house. My father must have been at work, my mother must have been looking after my baby sister or doing other things around the house. All I know is I was alone watching a matinee movie on television.

All that I took with me in the years after watching the film was that it was about a boy who happened to be lost in the desert. He had a dog and ended up attacked by a snake before finally being found.

It scared the heck out of me.

I went years and years with the film floating back up to my consciousness every now and again. Then - a number of years ago - I decided to do some research to find out what the film was called and whether there was a chance of seeing it again.

The mission was partially a success. I found out that the title was Dirkie. However, in some countries - including Great Britain - it was released under another name: Lost in the Desert.

The unsuccessful part of the mission was the part where I thought there was a chance of seeing it again. I could have. I decided not to. The reason behind this choice was because I didn't want to spoil a childhood memory even though - as I wrote above - the film had haunted me from the moment I watched it.

Looking up Lost in the Desert turned into something amazing. My search brought me to the IMDB message board where many, many others had similar experiences of watching this film as a child and having scenes of it glued to their memories for the rest of their lives.

I first wrote about the movie in a post published in 2015. In this post, I was able to quote some of the IMDB users' thoughts on the film. Unfortunately, the message boards have been removed from the IMDB site. I'm glad I was able to copy some of the quotes from it.

In the years since writing about the film, and deciding not to watch it, little reminders would cross my mind and I would - occasionally - start to think whether I should watch it with adult eyes. I have recently been passing the house where I was living when I first came across Lost in the Desert. Each time I've seen the building, the memories of Dirkie have flooded back.

After returning home from one of my recent trips, I decided to do a fresh online search. I wanted to see more reaction. Boy, did I get that.

I came across a blog post that was written in 2003. The blogger wrote about their own memories of the film. What was even more fascinating was seeing the reaction to it in the comment section of the post. It was filled with message-upon-message of readers with similar experiences of the film leaving a lasting impression. Sprinkled in with some of the reminiscences were requests looking to find the title on DVD.

It was like rereading the lost IMDB reactions. Only better.

Realising that this would be the thirty-fifth year since watching it, I once again began to entertain the idea of viewing it with - as I keep repeating - adult eyes. I found it on YouTube and spent time wondering whether to rewatch it. My reluctance once again came down to not wanting to ruin a childhood memory.

One of the few things working the idea's favour was that it would allow me to write about the experience.

The fact I am writing about Lost in the Desert should be a giveaway, right?

This time with adult eyes.

Separating my first viewing of the film with watching it through 'Adult Eyes' had another benefit - it allowed me to get the story more than I did in late 1983 or early '84.

The film starts off with the young boy - Dirkie - and his father sitting at a piano. We later find out that the father is a concert pianist. More importantly, however, we find out that Dirkie is unwell and needs to take a holiday away from the air of Johannesburg. Dirkie's father is unable to take him due to concert commitments, so they ask Dirkie's Uncle Pete if the boy could stay on his farm while he gets over his ailment.

Pete picks up Dirkie and the lad's pet dog, Lolly, by plane. As the three are crossing the Kalahari Desert, Pete suffers a heart attack and makes a crash landing. 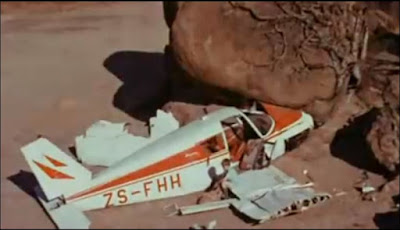 Pete doesn't survive. The other passengers do.

Before crashing, Pete is able to send out a Mayday message. This prompts an air search for the lost boy. The communication device on the plane wasn't damaged in the wreck, so we see Dirkie and his father speak over radio as the search party continues its hunt.

But it would be boring if the entire film was about Dirkie's wait for help, right? 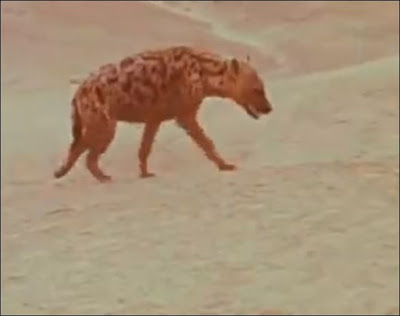 The animal becomes Dirkie's biggest challenge in the desert. Its arrival results in Dirkie lighting a fire to scare it off. It works. However, the fire spreads and it blows up the plane leaving the boy with no way to communicate with the people looking for him.

The film not only follows Dirkie's struggle to survive in the desert. It also chronicles the father's plight in trying to get his son back home. One thing that the father does to assist his son is spread leaflets from the sky and into the desert with tips on how to deal with desert challenges. The irony being that Dirkie was - to a certain extent - managing well enough by finding water and other kinds of nourishment.

One of the the scenes that I recalled as a child was in the latter part of the film where Dirkie is attacked by a snake. It resulted in the stranded child having a puffed up eye - something that stuck with me for all those years. It wasn't as distressing to see it as an adult, but - as a child - it petrified me. 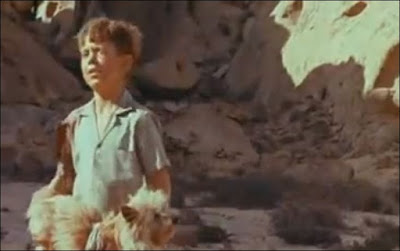 Following the attack, Dirkie walks around in a bewildered state and is then stung by a scorpion which leaves him laying. He is eventually saved by a bushman and his son. They tend to him and, once he has recovered from the snake and scorpion attack, Dirkie believes that the desert natives have eaten Lolly. This results in Dirkie running away from the only humans he had encountered since the crash.

He soon finds out that Lolly is safe, tries to get the bushmen back on his side, but they leave him alone.

Shortly after this scene, the father and another character - Smitty - are in the desert (the wreckage has now been found, so they have a better idea where to look for the boy) and they come across the main bushman who reluctantly leads the father to the last place where Dirkie was seen. 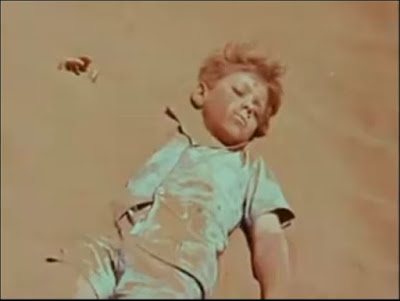 It has been a few days since I watched the film. I guess you want to know whether I believe it was a good idea to go back.

The positive, as I wrote above, is that I was able to grasp the story  - with adult eyes - more than I did as a four-year-old.

There was so much I didn't remember from my initial viewing of the film. I forgot the major things like the hyena and how it played a part in the plane blowing up. I also didn't recall another key part of the story which was the bushmen saving Dirkie from the snake and scorpion attacks and ultimately being responsible for reuniting the father with his son.

I also didn't recall the scorpion which is kind of surprising as it came moments after the snake struck its victim.

In a way, I now have two memories of the movie. The most recent one being the 2018 re-watching and finally getting the opportunity to understand the story more than I could have as a child.

And then there's the memory that has haunted me for years.

Thankfully, re-watching Lost in the Desert hasn't exorcised the early memories. All it has done is given me the aforementioned chance to understand it clearly.

By watching it with adult eyes.
Posted by David Taylor at 12:00 AM