Yesterday's Google Doodle was a lot of fun.

When I first visited the Google website yesterday morning, I came across the above image. I don't follow cricket, but I figured there must have been a tournament or league that was starting.

I clicked the image to find out what it was...

Not a big mistake. But, it turned into a wasted few hours.

Clicking the Doodle led me to a page where I could play a game of cricket as a... cricket. For some reason, the bowler and the fielders were snails.

I spent most of the day trying to beat the high scores that I had attained. I gave up with 257 runs. I had a look around Twitter and noticed that - of the people I came across that had played it - my score wasn't too bad. I saw a few in the double digits. The highest score I saw was in the 400s. Not bad! 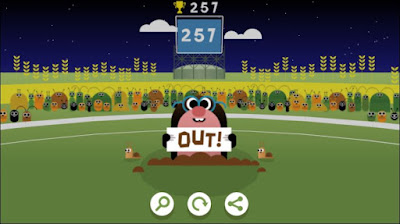 By the way, I still have no idea what the cricket theme was all about.
Posted by David Taylor at 7:00 AM