Check out the picture below: 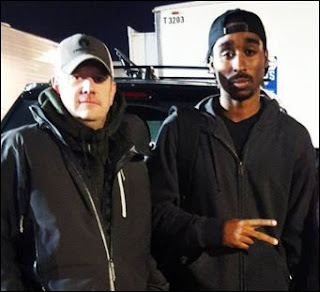 The image is taken from a film that's being made based on the life of Tupac Shakur.

That guy looks EXACTLY like Pac. His name is Demetrius Shipp Junior.

I'm unsure when the movie is coming out, but it'll be called All Eyez On Me. That's the title of the album 2Pac released when he first came to Death Row Records.

The film is also starring the actor who played Biggie Smalls in the movie Notorious. Great. You cannot tell 2Pac's story without the Notorious B.I.G.

I definitely will go out of my way to watch this.