I woke up, turned over, picked up my phone, missed calls - none, texts - none, email - none.

Last night was Tuesday. There was a Smackdown taping so when I saw the hashtag in a tweet, I assumed it was for an angle that took place on the show.

You know, maybe WWE brought Paul Bearer back for the lead-in to WrestleMania so, to get heat, they had CM Punk attack him or something.

How wrong I was.

Paul Bearer, Percy Pringle III or how he was known to his family - Bill Moody has passed away.

If you are a wrestling fan, there is no doubt you will know of Bill Moody's Paul Bearer character who was aligned with, and sometimes against, The Undertaker for the best part of The Undertaker's twenty-three years in World Wrestling Entertainment.

I have so many Paul Bearer memories and I am going to share with you every single one because of just how much of his time this guy gave me over the past decade.

I'll start twenty years ago, though.

I've written about the time I met the WWF wrestlers in December of 1993 on at least one occasion on this blog. I'll no doubt mention it again later this year on the twentieth anniversary. One of the funniest memories of that day was meeting Paul Bearer.

We all remember Bearer as being the mortician looking fella in a suit and tie. Well, when I met him, he was wearing his regular clothes and as he saw my friend and I waiting for them to get off the coach he let out his 'Ohhhhh Yessssssss!' catchphrase to us.

There was something crazy seeing Paul Bearer in a tracksuit doing his gimmick.

On the day that Curt Hennig passed away, I found myself coming across Paul Bearer's website. It was a site filled with many of his stories. I found myself going back there a lot that week. I remember the week because it was the same week my uncle passed away.

Anyway, on one of the visits I thought I would send Percy (he had left WWE and was using his Percy name at that time) an email. I didn't expect a reply but sent it nonetheless.

I told him the story of meeting him and - just like I already noted above - said how I found him doing the gimmick in street clothes to be one of the fondest memories I have of that day.

He replied to me and thanked me for taking the time to contact him.

I ended up joining a message board on his website and spent the best part of the 2003 and early 2004 interacting with him.

He gave a lot of his time to people on that message board. 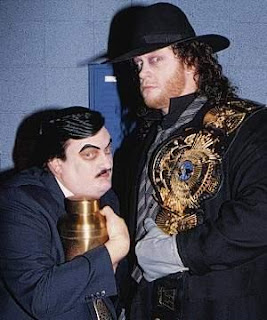 There was this one day when I asked him a question about when the WWF was doing the fake Undertaker angle on TV with Paul Bearer arguing that Ted Dibiase's version was not the real one. The real Undertaker was absent for a few months before his big return at SummerSlam 1994 when he wrestled the doppelganger. However, Bearer and Mark Calaway (the real Taker) were both appearing on Saturday morning kids shows over here in the UK and I pondered whether he felt that it was somewhat damaging the storyline in a way. He told me that the thought had never crossed his mind until that moment and also added that I had asked a well structured and intelligent question.

Flattery will get you everywhere!

That wasn't the best story I have from my visits to his website.

In 2004, The Undertaker was returning back to his supernatural character after spending four years as a biker-type wrestler. The rumour going around was that Paul Bearer would return alongside him.

On the Saturday before WrestleMania XX, I was on the message board and noticed that there was someone in the chatroom facility that was part of the forum. I hadn't seen anybody in there on all my previous visits so clicked the link.

Surprisingly, the person in the room was Percy.

The thing I remember the most about that chat was that the big question he was being asked on the message board was 'are you going to return at WrestleMania?' I knew he wasn't going to tell me even if I did ask so I didn't even bother. I thought it was more respectful that way.

We all know that he did return at that show so it was kind of cool to know that I spoke to him the day before he made his return as Paul Bearer.

Once he had signed back with WWE, the message board closed down so I didn't visit his site as often as I had been doing.

I'd email him now and again when he wrote a blog that was interesting and he always replied. I made a special point of wishing him well when his wife passed away after a long battle with cancer.

Last year, I noticed he was using Twitter so contacted him on there.

The first time I tweeted him was when I was trying to convert all my old VHS tapes to MPEG and DVD last summer. I was up to 1996 so saw the heel Paul Bearer doing his 'I'm Paul Bearer, and you're not!' line at SummerSlam so I tweeted:

You're Paul Bearer, and I'm not!

Be thankful for that!

The last communication we had was a few weeks later when he noted how his granddaughter was staying. He made a reference to the Mickey Mouse Clubhouse and - as I had to endure the show every day for the past two years myself - I knew what he was on about so did a joke back to him. He got it.

I was going to email him a few weeks ago but didn't get around to it thinking I would catch up another time.

There's only one way to end today's blog and it's the way Percy, Paul or Bill would have. The way he ended his blog posts and email exchanges. Two words.