On May 5th, I published a post titled 'Doing A Tricky Codewords Puzzle' in which I tried my hand at a puzzle from All New Codewords - a book from The Telegraph newspaper.

I had trepidations about having a go at the puzzle because - on paper - I was put off by the fact that I was given a two letter head-start. I am used to having three or four letters before I kick things off.

The first puzzle in the book was completed in twenty-three minutes and forty-four seconds. I have done more since then and have had times ranging from approximately eighteen to thirty minutes. I shouldn't brag just yet, but I have yet to spoil a puzzle by messing up.

I thought I'd have a go at filling in the seventh puzzle in the book for today's post. So, here it is before I embark on it. 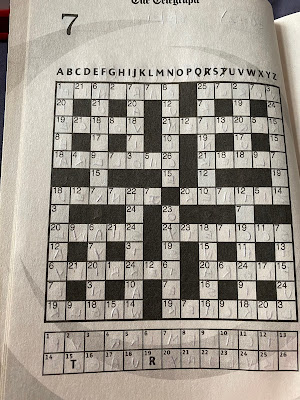 And here is the end result. I didn't mess up! 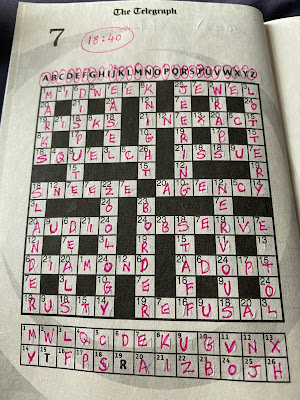 It took me eighteen minutes and forty seconds to finish it off (after taking a picture of it, I notice that I hadn't added an X to EXTOL on the bottom right of the grid).
18:40 is around the second-best time I've achieved in this book. The best is 18:13 which was on puzzle two.
I'm sure it'll end up getting harder as I progress through the book, but - for now - I am doing a lot better than I had imagined when I first opened it up and was put off by the two-letter head start and acknowledgement by the editor that the puzzles are harder than what I am used to.
At the end of the day, I am having fun with this book. So far!
Buy All New Codewords 1 On Amazon
Posted by David Taylor at 12:00 AM