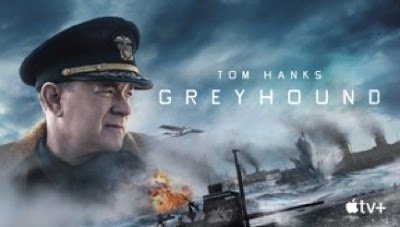 I watched the new Tom Hanks movie - Greyhound - earlier this week.
The film, which is available to Apple TV+ subscribers, is about a US Navy commander who captains a ship that is in a convoy from the USA to Britain across the Atlantic Ocean during World War II.
The operation is hampered by German U-boats that attack the vessels in the convoy.
I wasn't sure whether I would enjoy the film, but thought that I would make the most out of my Apple TV+ subscription and watch it. I'm glad I did because I found it enjoyable.
The movie is only ninety minutes long, so it is fast paced from the start. The intensity was thrilling especially when I thought that people really did have to deal with this during the war.
Greyhound is based on the book titled The Good Shepherd by C.S. Forester. However, the screenplay was written by the main star.
It was originally set to have a theatrical release, but - due to the pandemic - Sony Pictures sold the distribution rights to Apple.
Posted by David Taylor at 12:00 AM